Why is ethnicity important?

The 1991 Census first introduced a question on ethnic grouping to enable private and public organisations to monitor equal opportunities /anti-discrimination policies and to plan for the future through resource allocation and provision of services.

Indian was the next largest single ethnic group with 20,232 people (1.8 per cent) followed by Pakistani (1.0 per cent). However those categorised as “Other Asian” accounted for 1.7% of the population in total. 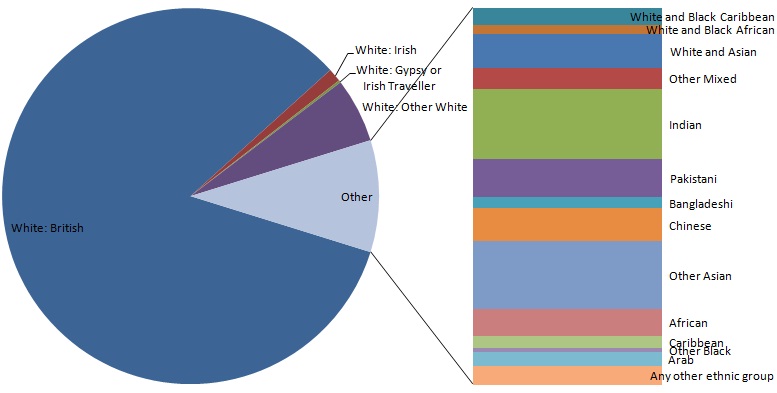 Changing picture of ethnicity over time

Over the last decade Surrey became more ethnically diverse. Caution is needed when comparing census ethnic data over the years due to changes and increases in tick boxes and changes to how the question was worded (change from cultural to ethnic background).

There was an increase in all other minority ethnic groups with a big increase in people reporting their ethnicity in “Other Asian” groups.

Differences in ethnicity across local authorities

Elmbridge has the highest proportion (10.4 per cent) in all other white groups with Tandridge the lowest (4.6 per cent)

How does Surrey compare with England and the South East?

Surrey is less diverse than England as a whole with 83.5 per cent of the population reporting their ethnic group as White British compared with 79.8 per cent in England. However in the South East as a whole 85.2 percent were recorded as White British.

More people in Surrey (6.9 percent) were recorded in other white ethnic groups than in England (5.7 percent) with fewer (9.6 per cent compared with 14.6 per cent) in all other ethnic groups.
Table 3: Ethnic groups 2011, Surrey, England and South East 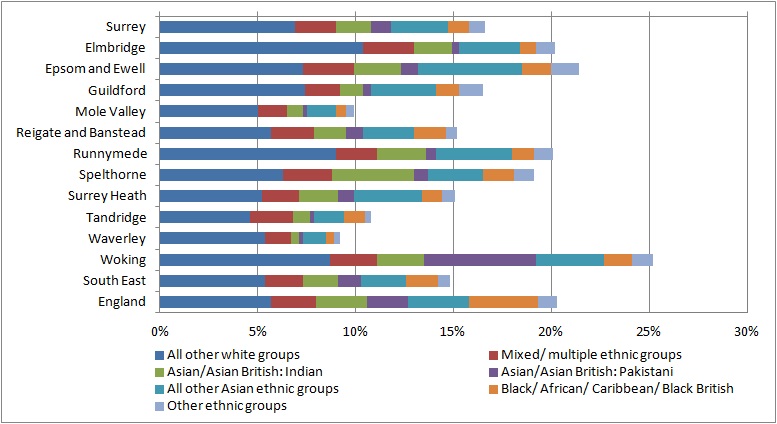 The older population is less diverse than the younger cohorts. 92.5 percent of people aged 65+ are White British with just 2.7 per cent in non white ethnic groups. Other white ethnicities are most dominant in the 25-64 age group (8.4 per cent). The highest proportion of Asian ethnicities (other than Indian and Pakistani) is among young adults aged 16-24 (4.5 per cent). The proportion of mixed/multiple ethnic groups is highest among children under 16 (5.2 percent).
Table 4: Ethnic groups by age group 2011