The Census asks people to state their religion. The quesion is voluntary and “no religion” is one of the options available. 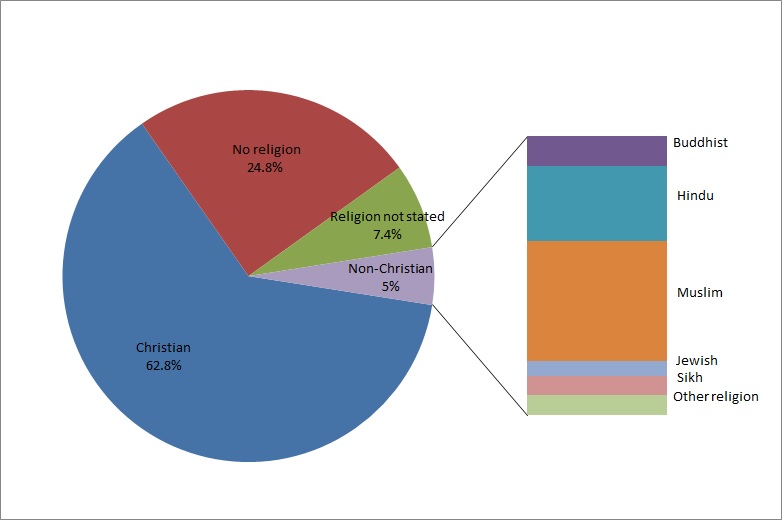 Changing picture of religion over time

Differences in religion across local authorities

Christianity was the largest religion across all boroughs in Surrey. In 10 out of 11 boroughs the proportion of people who were Christian was over 60%.

Waverley was the borough with the highest percentage of Christians (65.2%) and the lowest percentages in all the Non-Christian religions.

Woking was the most diverse borough in terms of religion with 10.7 % of the population identifying with a religion other than the Christian and had the highest proportion of Muslims at 7.4%.

The proportion reporting no religion increased across all the boroughs. The borough with the highest proportion of people stating that they have “No religion” was Guilford with 27.8%. Guilford was also the borough that had the largest decrease in Christian affiliation (-13.4 percentage points).
Table 2: Religion 2011, Local Authorities in Surrey

How does Surrey compare with England and the South East?

Younger people are more likely to have no religion than older people. More than a third (36%) of young adults aged 16-24 say they have no religion whereas only 10% of people aged over 65 have no religion. Older people are more likely to be Christian with 80% affiliating with this religion. In contrast only 51% of young adults say they are Christian. The highest proportion of the population who have other religions is the 25-44 age group where 7.2% have non Christian religions.
Table 4: Religion by age 2011 – Surrey