A summary which focuses on child poverty and disadvantage in Surrey can be found on Surrey-i here.

A summary of low income and unemployment in Surrey which is not focused on children can be found on Surrey-i here.

A summary of pensioners in poverty in Surrey can be found on Surrey-i here.

The definition of fuel poverty is now based on the Low Income Low Energy Efficiency (LILEE) fuel poverty metric where a household is considered fuel poor if; a) it is living in a property with an energy efficiency rating of band D, E, F or G as determined by the most up-to-date Fuel Poverty Energy Efficiency Rating (FPEER) Methodology; and b) its disposable income (income after housing costs (AHC) and energy needs) would be below the poverty line.

The indicator is estimated using regional data from the English Housing Survey and modelling down to local areas based on characteristics of the local area.

This data file also includes other statistics to provide context to some of the relevant area differences whilst considering fuel poverty across Surrey.

*The energy efficiency statistics are based on Energy Performance Certificates (EPC) for domestic buildings between January 2017 and December 2021. Only homes that have been built, bought, sold or retrofitted since 2008 have an EPC, which represents about 50 to 60 per cent of homes within a local authority area. Additionally, data has not been published where the holder of the energy certificate has 'opted-out' of disclosure, energy certificates are excluded on grounds of national security or energy certificates are marked as 'cancelled' or 'not for issue'.

The 20 wards with the highest proportions of households in fuel poverty in 2020 were:

The 10 wards with the lowest proportions of households in fuel poverty in 2020 were: 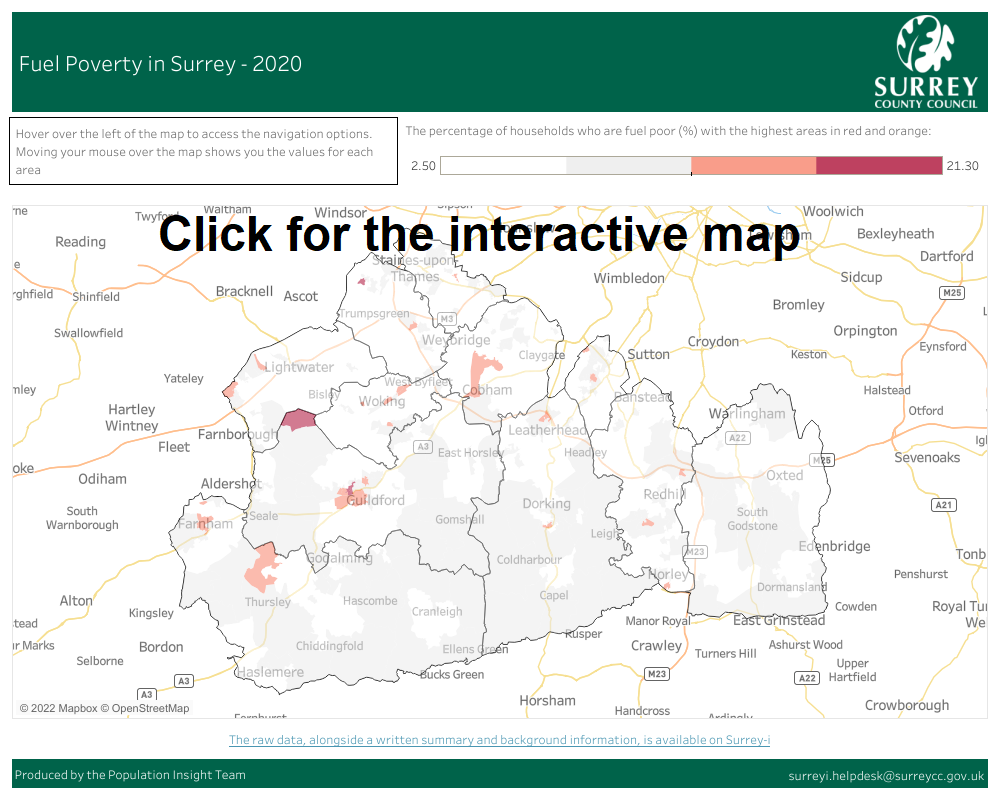 The following statistics were accessed from Local Insight but the original sources are: